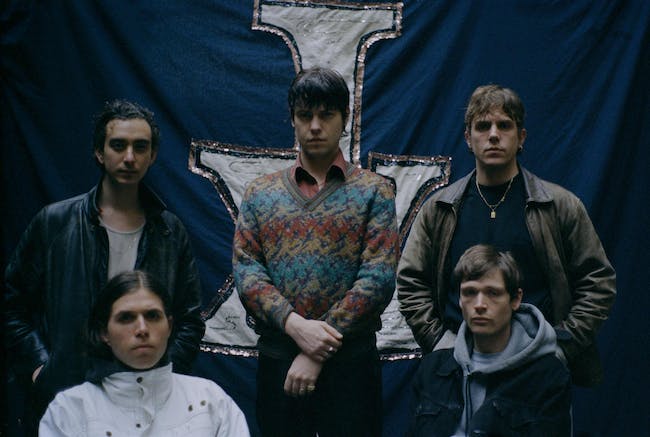 iCal
Google
Iceage at The Chapel

Due to personal reasons we have been forced to cancel the first half of our upcoming US tour in February. All tickets will be refunded and new dates are being scheduled — we hope to see you all later in the year. Love Iceage

With each new release, Elias Bender Rønnenfelt, Jakob Tvilling Pless, Johan Surrballe Wieth and Dan Kjær Nielsenrefigure the contours of a typical Iceage song. This is especially true of Seek Shelter, their fifth LP and first forMexican Summer. Enrolling Sonic Boom (Pete Kember of Spacemen 3) to produce the record and an additionalguitarist in the form of Casper Morilla Fernandez, Seek Shelter sees Iceage’s propulsive momentum pushing themin new, expansive, ecstatic directions. A decade on from their first record, Iceage continue to harness their livestogether through music. This journey, in music and life, has never progressed in a linear fashion.

Seek Shelter is the sound of a tight emotional core unwound. Rain dripped through cracks in the ceiling of Namouche, the dilapidated wood-paneled vintage studio in Lisbon where the band set up for 12 days. The band had to arrange their equipment around puddles. Pieces of cloth covered slowly filling buckets so that the sound of raindrops wouldn’t reach the microphones. Kember arranged garden lamps from a nearby party store for mood lighting in the high-ceiling space. It was the longest time Iceage have ever spent making an album. When the rain had stopped, Seek Shelter revealed itself as a collection of songs radiating warmth and a profound desire for salvation in a world that’s spinning further and further out of control.

Iceage started making music together in 2008 as young teens in their hometown of Copenhagen. The band’s 2011 debut, New Brigade, crystallized the raucous energy and unbreakable brotherhood of Danish teenagers weaned on post-punk, hardcore and no wave, and it found ears and kin around the world. 2012’s You’re Nothing was hard, fast and raw, a bold doubling-down on the aggression of youth in the first record as well as the weight of expectation. Plowing Into the Field of Love (2014) and Beyondless (2018) saw a softening of the band’s hardest edges and the arrival of a certain world-weary vaudeville in the Iceage sound. In an extraordinary and unexpected run, the band had gone from the fertile hyperlocal Copenhagen scene to stages all over the world. Iceage’s past two records — all filtered twangy guitar riffs, sparse piano arrangements, and slinky, slow-moving rhythms — ventured into an intoxicated but knowing swirl, surveying the party at the end of the night. They’d seen it all, at least once, and their music rode the crest of that chaos.

Seek Shelter, the band’s first record made with an outside producer brought in alongside longtime collaborator Nis Bysted, is the place they have been called to next. Elias Bender Rønnenfelt casts the influence of producer Sonic Boom as that of a sparring partner, another wayward mind to bounce ideas off of and another pair of hands (along with Shawn Everett, who mixed the record) to help shape the sound. Kember had said in an interview that he’d like to produce for the band, and the feeling was mutual. Rønnenfelt recalls being 12 or 13, listening to Spacemen 3, the band Kember co-founded in 1982 at the age of 16. “It was one of those things that just reverberated with my being,” he explains. For Seek Shelter, “we wanted a partner that had some noise that we didn’t have, more a wizard than a producer. We thought he’d be that kind of wizard for us, and we were right — he came in with a truckload of strange equipment that we’d never seen before.” Kember, reflecting on the session and reaching for his highest praise, describes Iceage as “fucking show offs, like everyone who was ever great and emotional and honest.”

For Seek Shelter’s story of scorched-earth salvation, the band’s songwriting embraces conventional structures more conspicuously than it has in the past. The dirge-like drone that opens the record gives way to a wall of reverb that sounds fuller and brighter than anything they've committed to tape, signalling a clarity of clouds breaking. American gospel and blues signatures break to the front of the slow-grooving “Vendetta” and harmonica-flecked “Gold City,” a record which sounds like the road, a desert mission under a blazing sun. The Lisboa Gospel Collective, who joined the band for two tracks on the final day in the studio, provide a new scale to Rønnenfelt’s incantations. There are moments of unvarnished romanticism, as on the brisk Jacques Brel-like “Drink Rain,” and an overcast tenderness that gently glides over “Love Kills Slowly.” The massive “High & Hurt” interpolates “Will the Circle Be Unbroken,” a warhorse of the American religious vernacular that has become an increasingly urgent plea over the past century. It’s not the only anthem that calls out to the heavens: later on, Rønnenfelt invokes the patron saint of music and poetry on “Dear Saint Cecilia,” a song for seekers everywhere. “Writing a song is like trying to find a space where you can make something that’s been riled up and down through the years feel like it belongs to your present moment,” says Rønnenfelt. “It’s all just scaffolding that you can project something onto.”

Rønnenfelt’s lyricism reaches grand heights despite its classic opacity — he sings of taking shelter, of tranquil affections that threaten to combust, and of a limp-wristed god with a cavalcade of devotees in search of relief. His expressionist imagery consistently hinges on the divine, a natural result of his desire to take a kernel of ordinary emotion and, as he explains, “blow it up like a balloon.” For Seek Shelter, as with all Iceage’s previous albums, Rønnenfelt stowed away for a set period of weeks and wrote the lyrics in one shot. “I set a time just to make sure that all the lyrics are written from the same mindset,” he explains of these weeks alone. The lyrics stem from journals that he’s kept over the past few years: “it becomes an amalgamation of ideas and impressions of things that you’ve been provoked by or had to live through. You end up with something that is a rough, blurry perspective of what that period of time was like, a mishmash of personal struggle that is shaded throughout by a world that seems more transparent in its inherently cruel ways.” Romance and desire, as described in “Love Kills Slowly” and the album closer “The Holding Hand,” are feelings that stretch torturously — a race without a finish line.

What precisely makes an Iceage song is still a mysterious thing, and the band wishes to maintain this protean quality. “If there’s ever a point in our history when something in the songs starts to seem easy but doesn’t really excite us that much, we just discard that shit right away,” he says. “You’ve always got to find a new vantage point to attack the assignment of writing a song. If we had a formula, it would be just a continuous watering down of what we do until we hated ourselves and quit.” With Seek Shelter, they’ve managed to hold onto this core of presence and risk while writing their most ambitious songs. Even Rønnenfelt was surprised with what they were able to create together. “I think when we started we were just lashing out completely blindfolded with no idea as to why we were doing anything.” He’s speaking of the new record and also of their entire existence as a band, a travelogue that has catapulted these four friends far past the horizons of punk. “Some of that we wanted to remain intact. We try to keep the mystery. If there's no sense of mystery in it for us, then it's not fun.” Seek Shelter is a record that now exists at a moment of a collective unknown, when every beating heart wonders what will happens next.