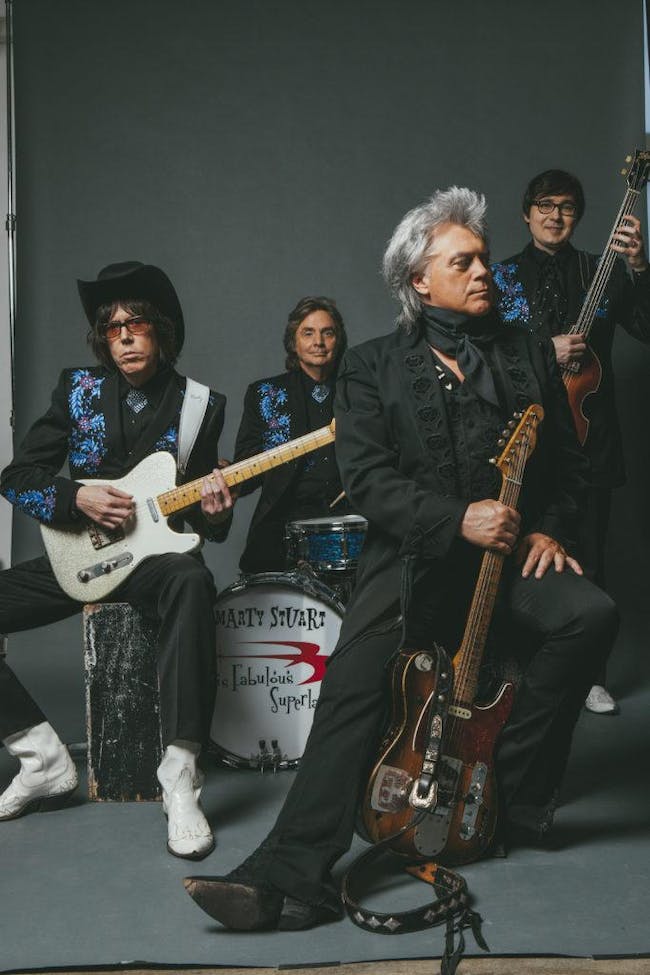 iCal
Google
Marty Stuart & His Fabulous Superlatives at The Chapel

Marty Stuart shares his new cover of Tom Petty’s “Fault Lines” the fourth track off Songs I Sing In The Dark, a collection of songs recorded acoustically at Marty’s former home outside of Nashville. Watch the video for “Fault Lines” here.

Stuart shares about the song:

I’ve never made any bones about it. I think Tom Petty and the Heartbreakers were the greatest rock & roll band that the United States of America has ever produced. They were modern-day gladiators in every sense of the word. In 2014, the Fabulous Superlatives and I toured across Canada. On a day off from the spotlight, I paid a visit to a record store in some suburban shopping center in a town along the way. The store was featuring Tom and the Heartbreakers’ project, Hypnotic Eye, as one of their new and noteworthy profiles. I bought it, took it back to the tour bus, and gave it a listen. When the song “Fault Lines” came charging out of the speakers, I stood up, turned the volume up way too loud, and played the song three times back-to-back. I immediately called Tom, got his voicemail, and left him a message. Determined to talk to somebody in the Heartbreakers’ camp, I then dialed Mike Campbell. I got him on the line and proceeded to throw roses, and go on about the song. His guitar playing, the band, the writing, the production on the album, Tom’s singing, and on and on. When I finally took a breath and shut up, Campbell, or “Cammell,” as Johnny Cash called him, said, “So you like it?” We laughed it off and kept on rolling.

Six years later, on the evening before I recorded “Fault Lines,” I called Mike once again. This time, to ask him about a particular chord he’d played when they’d recorded the song. He gave me a quick guitar lesson over the phone. When we hung up, I felt that I was ready to tackle “Fault Lines”. The following day, as I was driving to the session, I decided to try “Fault Lines” as a mandolin piece. Without a clue as to how it would turn out, I stepped up to the microphone and went for it. One take later, here’s Tom and Mike’s “Fault Lines”.

Marty Stuart will share a new song from the album a month, alongside a personal statement about each song’s importance, both personally and in the context of country music. Stuart said of his new collection, “The title tells the story. I have a long line of songs that range from obscure, originals, to favorites from various musical worlds that I often sing to myself when I’m alone. Until recently, I had never formally made a list of all the titles. When I did, I saw in those titles so many great songs that need to be remembered and passed down. There was a mighty congregation of names of profound songwriters whose presence and lyrics are to be cherished. And, looking into those songs I could hear the music of those brilliant musicians, arrangers, and singers who brought those tunes to life, and gave the world reason to love them. In the wake of these revelations, I was inspired to finally go to work on the idea of Songs I Sing in the Dark.”

Recently, The Country Music Association announced the induction of Marty Stuart into the Country Music Hall of Fame’s class of 2020 in the Modern Era Artist category. Stuart is inducted alongside Dean Dillon (Songwriter Category) and Hank Williams Jr. (Veterans Era Artist). “It is the ultimate honor in Country Music,” says Stuart. “I’m so honored to be included in this class and I’m honored to be included alongside Hank Jr. and Dean Dillon. I love those people. To be officially inducted into the Country Music Hall of Fame is beyond words. I’m usually not at a loss for words.” Details regarding a formal induction ceremony for Dillon, Stuart and Williams will be released as information is available. Full information about the class of 2020 inductees is available on the CMA site.

Stuart is currently raising funds and awareness for The Marty Stuart Congress of Country Music (MSCCM) in Philadelphia, Mississippi which will celebrate the rich cultural heritage of country music through live musical performance and educational programming. This tribute to the culture and rural ethics of America will be presented in a world-class country music museum and performing arts center. Marty Stuart has assembled a collection that spans over 20,000 pieces to tell a rich, emotional, and personal story of the lives of our common heritage. The $30 million project will create a 50,000+ square foot campus featuring the historic and recently renovated Ellis Theater, a newly constructed museum, classrooms, a community hall, meeting and event space, and a rooftop performance venue. MSCCM will embrace the roots of country music in its educational curriculum and programming. Changing displays will include internationally travelled artifacts and memorabilia, photography, outsider/folk art and Native American crafts. These art forms represent country music’s history and foreshadow its future. Musical programming will feature both legendary stars and the emerging artists of tomorrow.

Marty Stuart is a five-time GRAMMY-winner, platinum recording artist, Lifetime Achievement Award recipient from the Americana Music Association, Grand Ole Opry star, country music archivist, photographer, musician, and songwriter. Since starting out singing gospel as a child, Stuart has spent over four decades celebrating American roots music. His teenage years on tour with bluegrass legend Lester Flatt in the ’70s were followed by six years in Johnny Cash’s band in the ’80s, and a chart-topping tenure as a solo artist in the ’90s.

27 sets. Three days of performances. All live-streamed on hardlystrictlybluegrass.com, facebook.com/hardlystrictlybluegrass, and youtube.com/user/hsbfest. Tune in October 1, 2, 3 starting each day at 1pm PT/4pm ET to see this year's fantastic line-up, brought to you *live* from the Bay Area, with additional sets filmed in New Orleans and SF earlier this year. Invite your friends and join us!