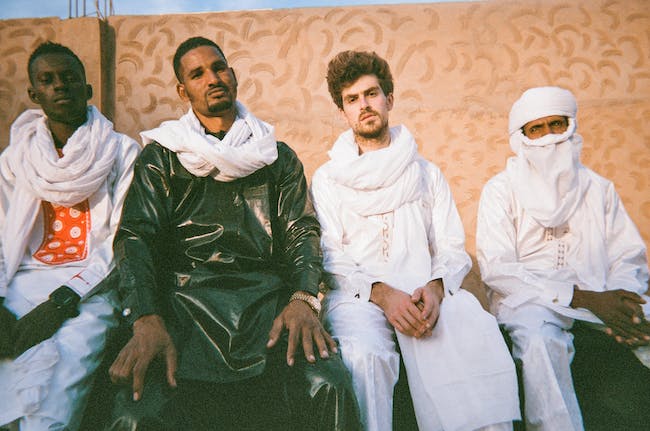 Mdou Moctar’s home is Agadez, a desert village in rural Niger. Inspired by YouTube videos of Eddie Van Halen’s six string techniques and traditional Tuareg melodies, he mastered the guitar which he himself built and created his own burning style. A born charismatic, Mdou went on to tell his story as an aspiring artist by writing, producing & starring in the first Tuareg language film: a remake of Purple Rain called Akounak Tedalat Taha Tazoughai - which translates to “Rain The Color Of Blue With A Little Red In It”, winning the approval of his family and his community. The word and the sound travelled across West Africa via mobile phone data cards, a popular form of local music distribution. Gruelling DIY world tours and albums on the independent US label Sahel Sounds followed, including 2019’s landmark Ilana: The Creator album that earned Mdou Moctar an ecstatic international audience.

Afrique Victime is result of the combined efforts of Mdou and the members of the band that shares his name. Mdou’s crucial collaborator is Ahmoudou Madassane, who’s been his rhythm guitarist since 2008- their two guitars are an alchemical combination. As a songwriter, producer and recording artist Ahmoudou is the premier musical ambassador to Tuaregs in Niger, empowering young musicians with instruments, recording opportunities, and visas. Masassane helped form the revolutionary first woman-fronted Tuareg guitar band Les Filles De Illighadad, whose debut album and tours caused an international sensation in 2019.

Producer & bassist Mikey Coltun flies 20 hours from Brooklyn, NYC, then takes a 28 hour bus ride to reach Agadez so the band can practice and record. With no support from a major label or a manager, they made this journey out of Niger every time they toured. In the past three years, Mikey’s played over 500 shows on three continents as Mdou Moctar’s bassist, road manager, producer/recording engineer, and friend. Coltun recorded and produced Afrique Victime around the band’s travels in 2019- in studios, apartments, hotel rooms, venue backstages, and in field recordings in Niger.

Recording and honing songs as a touring outfit forged a livewire new sound, and If Ilana was a late ’60s early ’70s ZZ Top and Black Sabbath record – Afrique Victime is mid ’70s to early ’80s Van Halen meets Black Flag meets Black Uhuru. The ferocity of Moctar’s electric guitar and the band’s hypnotic rhythm section are on awe- inspiring display on songs like “Chismiten” and the mournful yet incandescent title track. Elsewhere, Moctar finds inspiration in highlighting lesser known facets of the group: “While people have gotten to know Mdou Moctar as a rock band, there is a whole different set of music with this band done on acoustic guitars which we wanted to incorporate into this album in order to go through a sonic journey,” he says. Mdou pays homage to one of his heroes Abdallah Ag Oumbadagou, the legendary Niger musician and political revolutionary, on songs “Habibti” and “Layla”. “Abdallah was a contemporary of Tinariwen and helped to pioneer the sound of Tuareg guitar music blended with drum machines and electronic sounds”.

“From prison to Nobel prize. They ceded to Mandela / Africa is a victim of so many crimes / If we stay silent it will be the end of us / Why is this happening?“ Moctar asks on the heartfelt and rallying title track. “I want the world to know that we are making music to promote world peace and be with everyone on the same level, fighting against racism”, he says. “All colors and genders are equal. Women, Men and children all suffer in the desert due to the colonization by France and therefore there is a lack of the basics - hospitals, drinking water, schools.”

The needs of Agadez are a major part of what drives Moctar as an artist, and promoting the region’s youth through music is an especially personal cause. “I know what it’s like to have been in that position,” he says, “to not have the support of your family, or the money for guitars or strings, it’s really hard. I have a lot of support from the younger generation, because I help them out a lot. When I get back from tour, I give them gear that I bought while I was away so they can go out and form their own bands.”

Says Coltun: “In Agadez the music and feeling at Tuareg weddings is exactly like the best of Western DIY/Punk shows. It’s loud, energetic and powerful. There is a sense of everyone helping out. Tuaregs are a tight community. If you’re Tuareg you’re considered family.”

The music listeners are the beneficiaries of the staggeringly powerful do-it-yourself musical ethic of Mdou Moctar- the man and the band- who’ve worked so hard to bring the spirits of families and communities in Niger to the West. Afrique Victime sounds and feels like a Tuareg hand reaching down from the sky, and we are very lucky for this chance to get lifted. 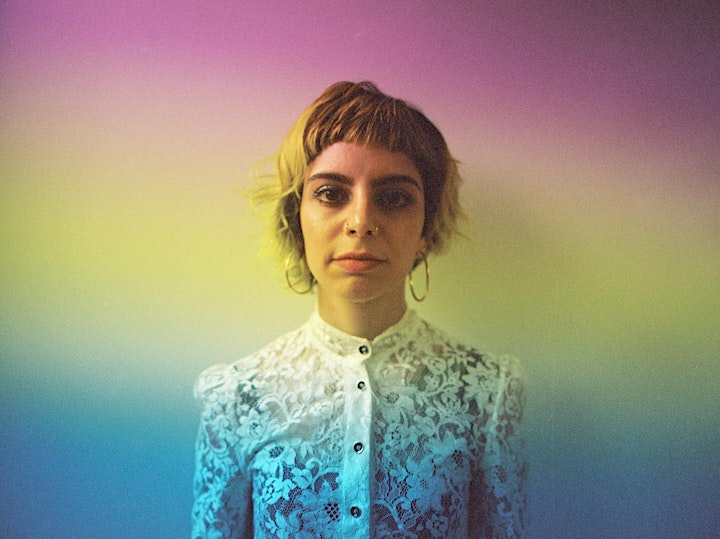 Natalie Chami is a proud Canadian-born Lebanese American who adopted the TALsounds moniker in 2009 for her explorations in the drone, ambient, and improvisational disciplines. Since choosing the TALsounds moniker, Chami has spent over a decade building a brilliant career as a solo artist in Chicago and beyond. Through her masterful synth work, operatic vocals, and nuanced sculpting of mood and atmosphere, Chami’s music strikes a balance between the extremely personal and the selflessly transportive. She spirals effortlessly through a never-ending carousel of solo improvisations and collaborations with other artists, and she seems to evolve with each performance, no matter how lofty and grandiose or humble and intimate those performances may be.

After a series of tape releases on labels like Hausu Mountain and Moog’s own physical imprint, Chami released her first TALsounds LP, Love Sick, with New York’s Ba Da Bing Records in 2017. Her second LP, Acquiesce, arrived in 2020 on NNA Tapes. Performed entirely by Chami and produced by Cooper Crain (Bitchin’ Bajas, Cave), Acquiesce is a perfect amalgamation of Chami as composer and improviser. Pitchfork said of Acquiesce that it “always goes deeper rather than bigger,” and that the songs “feel uniquely designed to pull you into them.” Other commentary on the music of TALsounds has appeared in publications including The Fader, which acknowledged that Chami “has spent the past decade developing a reputation as one of America’s most compelling DIY artists,” and the Chicago Reader, which named Love Sick one of the best albums of the decade and identifies Chami as “a crucial contributor and even one of the faces of the city’s contemporary avant-garde electronic scene.”

Whether she’s opening for Merzbow or Mary Lattimore, Tim Hecker or Tortoise, Mdou Moctar or Kaitlyn Aurelia Smith, Chami is adept at drawing audiences into her entrancing performances and leaving them wide open to receive whatever comes next. Chami has performed across America and Canada, and she traveled to Europe in 2018 for a string of dates with Chicago composer Haley Fohr (Circuit Des Yeux). As a member of free music trio Good Willsmith, she has toured the US and released nine albums since 2012, including the LPs The Honeymoon Workbook (2014) and Things Our Bodies Used To Have (2016), along with Exit Future Heart (2018), a collaborative LP recorded with Dustin Wong and Takako Minekawa—all issued through Mexico City-based label Umor Rex. Chami also regularly collaborates in improvisational ensembles with musicians from Chicago and beyond, including frequent tour-mate Whitney Johnson (Matchess) and Brett Naucke. Johnson and Chami will release their first collaborative LP as Damiana, entitled Vines, through Hausu Mountain in Summer 2021, and Naucke, Chami, and Johnson’s collaboration, Mirror Ensemble, will be out on American Dream Records in Fall 2021.

Outside of her work in live performance and music production, Chami was a founding faculty member at the Chicago High School for the Arts, Chicago’s premier public high school for music and the arts, where she served as the Vocal Chair and developed curriculum for a variety of courses, including vocal technique and music technology. She also oversaw the development and implementation of anti-racist and trauma-informed curriculum at ChiArts, and she built relationships with various organizations in order to provide opportunities for students, including music conservatories and universities around the world. In addition to maintaining a private voice studio for students since 2010, Chami was tapped in 2019 to be an influencer and ambassador for the online musical instrument marketplace, Reverb. Leveraging her individual expertise and community collaborations, Chami now works with a talented Product Specialist team at KORG USA, where she creates curriculum on synthesizers, hosts frequent educational live streams on KORG products, and produces marketing videos on various synthesizers and effects. She also scored her first film in 2020, Head to Head, which follows women experiencing traumatic blows to their self-image after unexpectedly losing their hair due to Alopecia, Lupus, or chemotherapy. Head to Head received accolades from the Beloit International Film Festival, the Minority Health Film Festival, the Heartland International Film Festival, and the Chi-Town Multicultural Film Festival.

Acquiesce is available now on NNA Tapes, and TALsounds will tour with Mdou Moctor throughout the western United States in Fall 2021.