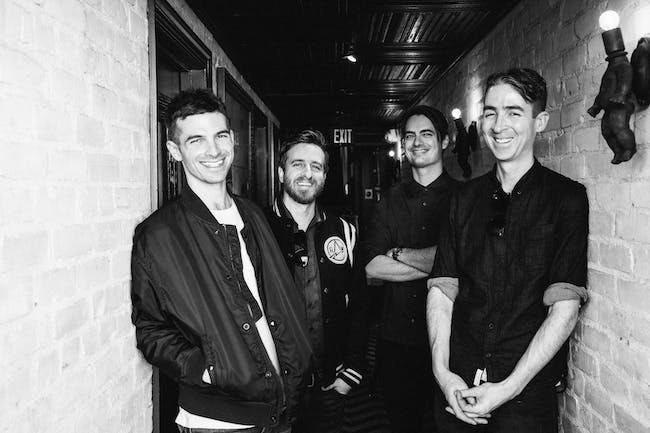 The hiatus is over. And while celebrating its 25th year of existence, Phantom Planet’s Alex Greenwald, Sam Farrar, Darren Robinson and Jeff Conrad are in the midst of making new music with Raise The Dead producer Tony Berg at the fabled Sound City Studio.

“We feel like we’re returning home,” says Greenwald, singer, rhythm guitarist and chief songwriter. “The boys in Phantom Planet are my brothers, and we figured it was time for a full fledged family reunion”

For the record, the Los Angeles band responsible for four albums of energetic and diversified alt rock; and are known for writing anthemic hits like “California,” – the infectious theme of the popular four-season TV series The O.C; the vibrant fan favorite, “Do The Panic” and the gritty, punk-propelled “Big Brat”.

A band known for their wildly exciting shows with deep fan engagement – many found Greenwald literally hanging from the rafters of the venue to entertain the masses on more than one occasion. Having toured with No Doubt, Incubus and many others, Phantom Planet quickly earned the fans’ staunch loyalty through a combination of stellar musicianship and their compelling material.

Forming in 1994, they released the prophetically titled Phantom Planet Is Missing. Four years later, followed 2002’s The Guest – which featured the evergreen “California,” their biggest hit. The self-titled Phantom Planet and 2008’s Raise The Dead followed before the first breather ensued. But they never officially broke up.

At this point, each Phantom Planet member pursued satellite interests before they briefly reunited in 2012: Bassist Sam Farrar, who had been collaborating with Maroon 5 since 2001, became more immersed in the band, touring and recording with them before being asked to be a full-fledged member in 2016. He also signed a solo publishing deal with Warner Chappell Music, moving on to write & produce with artists as diverse as Sara Bareilles, Fitz & The Tantrums and Santigold.

Alex Greenwald began working on his solo album Yo!, (eventually released in 2014) and put on his production cap for projects by The Like and The Young Veins, followed by a high profile turn as musical director for Mark Ronson and The Business Intl. He also formed another band, JJAMZ , in 2009, released an album called Suicide Pact and later rechristened them as Phases, which released a self-titled album on Warner Music in 2016.

Guitarist Darren Robinson divided his time between a number of projects – touring with Miniature Tigers, The Californian and creating Twin Terrors and Dead Honcho.

And drummer Jeff Conrad, who replaced founding member Jason Schwartzman (who left the band to pursue acting in 2004), built a stellar reputation as a go-to video editor and documentary music composer, working with such clients as Google and ESPN. He also anchored popular Ska band Siren Six, who held a recent 20th anniversary gig of their own to commemorate the occasion.

Phantom Planet briefly reunited for a few gigs in 2012 and flirted with the idea of a more permanent reconsolidation, but the timing wasn’t right.

“If I saw Sam at a party, we’d ask if each other was free, but we both had other obligations,” Greenwald recalls. “We had been talking about it for two years. Since Sam also plays in Maroon 5 and they tour a lot, it’s been an interesting scheduling dilemma. Suddenly a lot of things just clicked into place last year.”

Now, it’s time to pick up the reins and see how all of these collective experiences are going to forge a new Phantom Planet sound. The band has already tested its live chops during a secret show at No Name (in Los Angeles) on January 19, and the musical chemistry was potent as ever.

“We’ve all gone on these various treks and I guess we’ve decided the time is right,” notes Greenwald. “It certainly feels right. We’ve always been friends – it’s not like we got tired of each other or that anyone was mad at each other. And now that we’ve come together, it’s as if no time has elapsed. It’s been a lot of fun!”

As Phantom Planet experiments with new songs and sonics, Greenwald insists Tony Berg was the only outsider considered to produce the sessions as their sounding board.

“I’ve known him since I was 18 and he was A&R of Geffen Records in the ‘90s,” Greenwald explains. “He’s always been a big proponent of my song-writing and he’s probably one of the only people whose opinion I trust.”

As Phantom Planet prepares to unleash its latest adventurous refrains in the very near future, Greenwald suggests that “it’s not off the table that we will go on tour at least within the next year.”

Now that Phantom Planet is fully reinstated and ready to go, Alex Greenwald says he can’t wait to reconnect with the fans and showcase the band’s new music this summer.

He promises it’s worth the wait.

“We’ve become better musicians and better listeners. Every Phantom Planet record has been an experiment. I’m sure this one will be no different.”