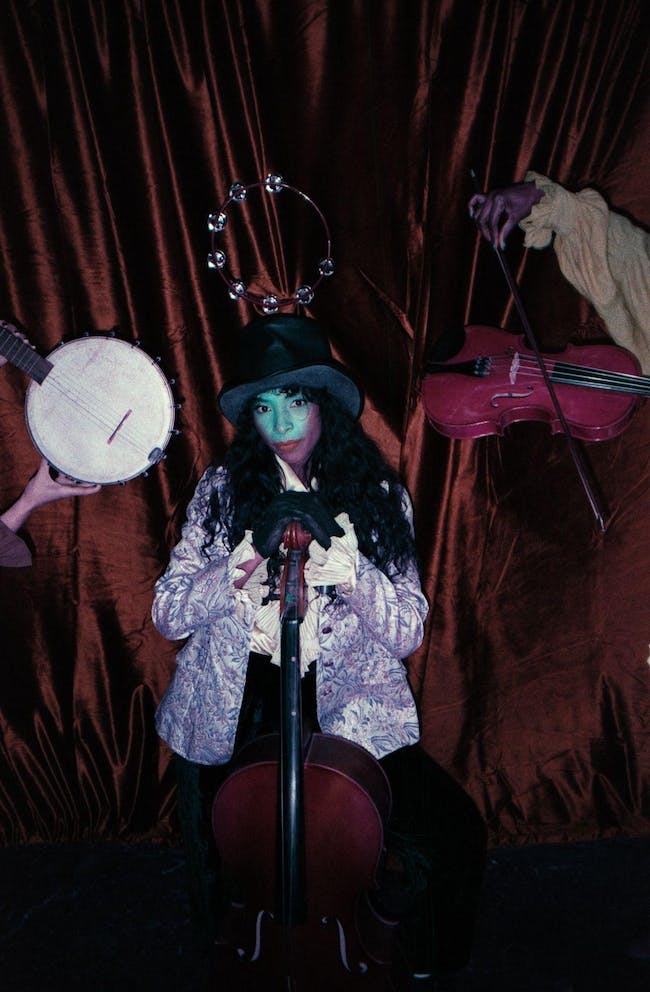 Red velvet curtains draw back to reveal a cosmic wheel of fortune, floating in the deep black star-studded theater of infinite space. A whirl of timbres, personalities, and stories. The Turning Wheel, the third full-length by the Bay Area artist SPELLLING (Chrystia Cabral), revolves around themes of human unity, the future, divine love and the enigmatic ups and downs of being a part of this carnival called life.

Venturing to push the boundaries of her primarily synth-based work, SPELLLING took on the ambitious task of orchestrating and self-producing an album that features an ensemble of 31 collaborating musicians. The Turning Wheel incorporates a vast range of rich acoustic sounds that cast SPELLLING’s work into vibrant new dimensions. The double LP is split into two halves — “Above” and “Below.” Lush string quartet shimmer combines with haunting banjo and wandering bassoon leads, as the album progresses from the more jubilant, warm, and dreamy mood of the “Above” tracks to the more chilling and gothic tone of the “Below” tracks. This progression is anchored by SPELLLING’s familiar bewitching vocal style that emphasizes the theatrical and folkloric heart of her songwriting.

The release of The Turning Wheel was delayed by almost a year from its intended release date in September 2020 but the forced pause ended up serving as a blessing in disguise. Navigating the chaos of recording and producing the remaining instrumentalists - either remotely or through rigid socially distanced studio sessions - was immensely difficult, however the delays ultimately opened up the opportunity for SPELLLING to dedicate more attention to her lyrics. The Turning Wheel demonstrates a distinct evolution of lyrical style, from the more incantatory and abbreviated approach of her previous work to a more expansive, narrative production.

The Turning Wheel is a manifestation of this considerable effort, time, and collaborative energy and will surely become a classic for its elegance. And while the artist’s eclectic influences, from soul to psych to pop to noise, remain present, something entirely new has also been born in the cosmic soup of this massive undertaking: a grand and genreless adventure. One that allows the artist’s authenticity to shine and also marks her as a conduit for something with a magic of its own.

SPELLLING’s previous bodies of work have earned her critical acclaim. Her 2017 debut Pantheon of Me was Bandcamp’s #4 Album of the Year and they raved: “Cabral has it, from her careful sense of composition to her charismatic presence to her ability to communicate with her music straight through to the listener’s heart.” Her first release on Sacred Bones, the Hard to Please single, was named a Best Track by The Guardian, who said the song was “like Solange looking in a haunted mirror.” Her second full length Mazy Fly saw great support from the likes of Pitchfork (“it’s the sound of an artist’s vision sharpening, pointing outward.”), Stereogum (“It’s a gorgeous and evocative and provocative record, and it points to a future where Cabral could pretty much do anything.”), Paste (“too appealing to resist”) and once again found its place in The Best Albums of 2019 at Bandcamp. 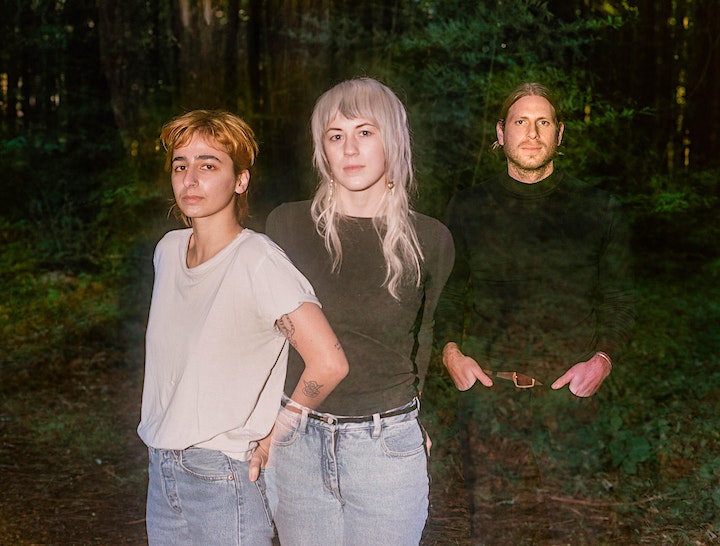 Bay Area trio Sour Widows already drew as equally on sharpness as they did tenderness, but the deliberately spare atmosphere of their new EP Crossing Over enhances both. Recorded remotely by the band while plans for getting into a studio were put on indefinite hold, these four songs dial back some of the volume that drove their self-titled 2020 debut, making space for themes of self-reflection and painful change that cut through with sharpened clarity. Tempos slow and the instrumentation softens, but anxiety and grief crackle in even the most deceptively delicate moments. The luminous vocal harmonies, complex guitar interplay, and understated drumming that have been at the core of the band's sound remain foundational, but these four softly lit songs reach deeper, all the more stirring in their subtlety. Crossing Over represents a new phase of Sour Widows’ artistry, and points to even further growth with their soon-to-follow full length debut. The new forms taken on Crossing Over document the band discovering a voice that derives its translucent power from restraint and intentionality.