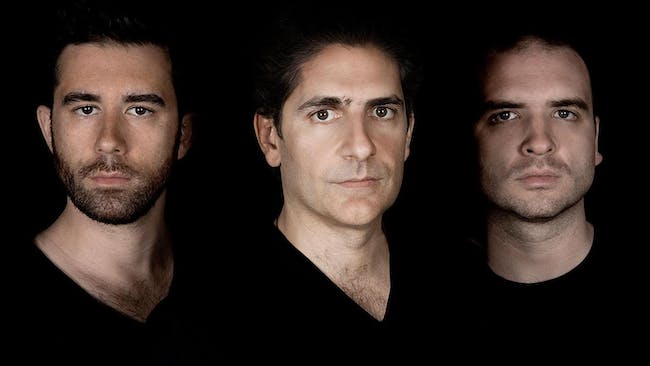 iCal
Google
Zopa at The Chapel

The trio’s story is one of chance connections, tracing to '83 when at age 17, Imperoli began “kicking it in the city,” choosing the arts over college. It was a fertile time in NY to explore theater, art, music— still connected to the late '60s early '70s underground scene that largely informed Imperioli’s artistic consciousness. That same year, Amitin and Tighe were born. Amitin grew up going to Latin music clubs with his father Mike Amitin who was a salsa musician in the golden era of the New York Latin music scene. Tighe comes from an avant-garde art background, who at age 14, handed Amitin a Shuggie Otis record and has continued to expand Amitin’s musical horizons. Amitin and Tighe played music together in high school in the early aughts, Amitin on bass and Tighe on drums.

In ‘91 Tighe and Imperioli shared the screen in Postcards from America, fifteen years later Imperioli heard Tighe was a drummer, and years after that, headed to The Strand where Tighe worked and “scooped him up” to be the drummer in his new band. They’re family now. Tighe married Imperioli’s cousin. Tighe invited Amitin along for their first practice session and the day before, Amitin ran into Michael on the street by chance greeting him with; “I’m playing with you tomorrow.”

“What’s even more serendipitous is that they are two of the best human beings I have ever had the privilege of knowing. Our first practice was in February of 2006 in NYC, our first gig was in June of that year at Cabaret Maxime in Lisbon and our first record was released in the infamous Summer of 2020. Along the way we did tons of shows in NYC, played on bills with the likes of Robert Pollard, David Johanson, Tommy Stinson, Walter Lure, Jesse Malin and Richard Butler, did an East coast tour of America, a few gigs in L.A. and returned once to Lisbon. It feels like we are just getting started.” - Imperioli

In covering Lou Reed’s “Ocean” and “Heroin” ZOPA’s sound taps into a collective nostalgic past, echoing the transcendent spaces of New York punk rock’n’roll. Relying on analog technology and minimal overdubbing for their production, their vintage sound takes center stage in live performance and recordings.

This connection to the past — and the gaps it creates through age and time — all dissipate in the spaces the band creates with its audiences. Imperioli’s voice is ripe with that feeling of awakening in which 17 feels eternal. Under the influences of Dinosaur Jr, The Smiths, My Bloody Valentine, The Replacements, Joy Division, Galaxy 500 and The Violent Femmes, ZOPA becomes timeless, ageless even, evoking the CBGB era with a beat generation grit to an intergenerational audience.

Fast forward to the present in their Brooklyn rehearsal space. Imperioli leans over his pedalboard “you can’t distort time” he says. “1 2 3 4,” they lead into “In Pink.” ZOPA has a single coming out in early 2022 produced by John Agnello called “Red Sky” and an accompanying video directed by Victoria Imperioli and Lisa Rinzler. In the new year, ZOPA plans to get back in the studio with Agnello to record new music. Until then, La Dolce Vita is available to stream on Bandcamp and Spotify. And if you ask Imperioli, “It feels like we are just getting started.”